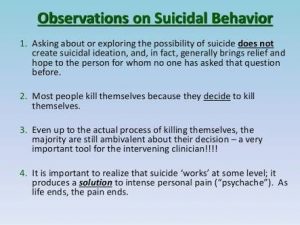 Intervening suicide threats has to start with understanding frequently misunderstood issues pertaining to suicidal thought. These issues include;

The number of suicidal threats is far greater than the number of suicidal acts and most such threats are not followed by an actual suicide. But attempted or completed suicides are often preceded by one or more suicidal threats, so each threat has to be taken seriously. Research indicates that up to 80% of suicidal people signal their intentions to others, in the hope that the signal will be recognized as a cry for help. These signals often include making a joke or threat about suicide or making a reference to being dead. If we do take them seriously and ask them if they mean what they are saying, the worst that can happen is we will learn that they really were joking. Not asking could result in a far worse outcome.

Well-meaning friends, family members, first responders, and even some clinicians may avoid asking a subject about suicidal ideation for fear of “putting ideas in her head”. In fact, just the opposite is usually true. There is no research evidence that indicates talking to people about suicide, in the context of care, respect, and prevention increases their risk of suicidal ideation or suicidal behaviors. Research does indicate that talking openly and responsibly about suicide lets a potentially suicidal person know they do not have to be alone, that there are people who want to listen and who want to help. Most people are relieved to finally be able to talk honestly about their feelings, and this alone can reduce the risk of an attempt.

Sometimes it is and sometimes it isn’t. It is difficult for most people to relate to the excruciating mental pain that would drive a person to end his or her life, especially if, to our eyes, the situation “isn’t all that bad,” or the person seems to “have everything to live for.” But a clinically depressed person who is overwhelmed by despair and hopelessness may not possess the rational perspective we might have when confronted with a similar challenge. In the depressed state, negatives are magnified and positives are discounted.

Sometimes it is, in which case there is hardly sufficient time to intervene because the person completes the act with little or no warning. A sudden traumatic event may be the ‘trigger’ event that moves a person to end their life, but it is unlikely the only cause. Suicides can appear to happen fast, or “out of nowhere,” when we have not noticed any indications of a person’s suicidality. Although most people (80%) present a range of indicators to the people around them, few of us have been educated to recognize these warning signs and we miss them. It is likely that many suicides could be prevented if we educated ourselves about the immediate, short-term, and long-term indicators of suicidal risk, as well as how to reach out and get effective help for someone who is letting us know they are in serious distress.

In most cases, suicide does not just occur in an emotional vacuum but takes place in the context of a history of mood disturbances and erratic behavior. Indeed, a high proportion of suicide attempters have had at least some prior contact with the mental health and/or legal systems. Knowing the subject’s history of mental illness is important mainly for predicting what kind of post-crisis life that person will be going back to, and thereby formulating an intervention strategy that really takes this variable into account. While the presence of an unmanaged mental health issue is strongly associated with suicide, it is important to note that most people assessed with a mental illness are not at risk of suicide and that few suicides are wholly the result of a mental illness.